When a picture paints a thousand words

A writer comes to grips with working on a graphic novel

Grumpy and stressed is an understatement for the mood I was in this morning. I am busy working on the graphic novel Chronicles of the 2nd Dark Age. Initially I didn’t know where to start, or even what would be the right way to do so. Then my pedantic collaborator asked me how far I was with my blogpost documenting my writing process.

He was brought up on  X-Men and Sandman and has dreams about Frazetta, Gaiman and Sienkiewicz  (I on the other hand was enamoured with the Bronte sisters and Oscar Wilde). Perhaps these are the reasons he could not at first understand my trepidation about the graphic novel style of writing. I do not understand his Geek-speak half the time we are discussing work. But I’m getting there.

Ok I have read Will Eisner, Neil Gaiman, Scott McCloud and something called Save the Cat by Blake Snyder (Although this was about scriptwriting, it did help with the graphic novel) and I am pretty sure I have figured it out.

The writing you do when collaborating on a graphic novel, is not written in a vacuum, not written in your own self-created world, where you have the luxury of manipulating your characters in environments of your own choosing.

No, instead your words have to work in symbiosis with the art and the preconceived worlds your characters explore. It is a dance of sorts with both the text and the art moving together to create something original and beautiful.

The one has to compliment the other, enriching it. And I have to admit that because of this, the story is so much more compelling. All the reader’s senses are engaged and therefore the reader’s  enjoyment is enhanced.

There are numerous elements employed in bringing the graphic novel to fruition. From both an  artistic and a linguistic point of view.

Obviously, each story must have a plot or else you have no story. Usually the plot should comprise of at least five elements: 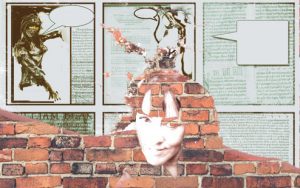 The Exposition: You introduce your protagonist and some of the characters. Time and place are established. The novel’s progenitors are described.

The reader is given an inkling as to the conflict and dramatic tensions. Setting or the time and location in which the narrative takes place are very important.

This determines many facets of your story for example, the kind of conflict that will take place, the intricacies of your characters, the vernacular you use.

Another vital aspect of your narrative is the point of view or perspective in which the story is told, namely first-person and third-person.

Climax: Conflict reaches its peak. The protagonist stands before choices which could either see them soar and triumph, or crash and burn.

Your conflict comprises any battle between opposing forces. Conflict piques the reader’s interest. At times the conflict will take place between the protagonist and the antagonist but this is not necessarily always the case.

Conflict can take many forms. Internal and external conflict, conflict with a hostile environment and its challenges, other factions, the challenge to survive, and acts of God.

The Falling action: The repercussions of the previous act start to unfold. Impetus slows down and tensions rise as a result of perceived fears as to whether the protagonist can be saved or not.

The story of a graphic novel is told through a progression of frames or, panels. The panels control the reader’s attention and dictates the sequence in which the reader will follow the narrative. Timing is integral to sequential art and the artist’s choice of the number and size of the panels contribute to the rhythm of the novel and also give the reader an idea of the passage of time.

It is essential that the artist of the graphic novel is skilled at the depiction of universal forms that will be recognised and understood by the reader.

Various techniques can be employed by the artist to convey aspects such as atmosphere and emotion.

Lighting is important when it comes to the creation of atmosphere, dialogue, universally recognised objects and facial expression all combine to communicate exact emotional meaning or message.